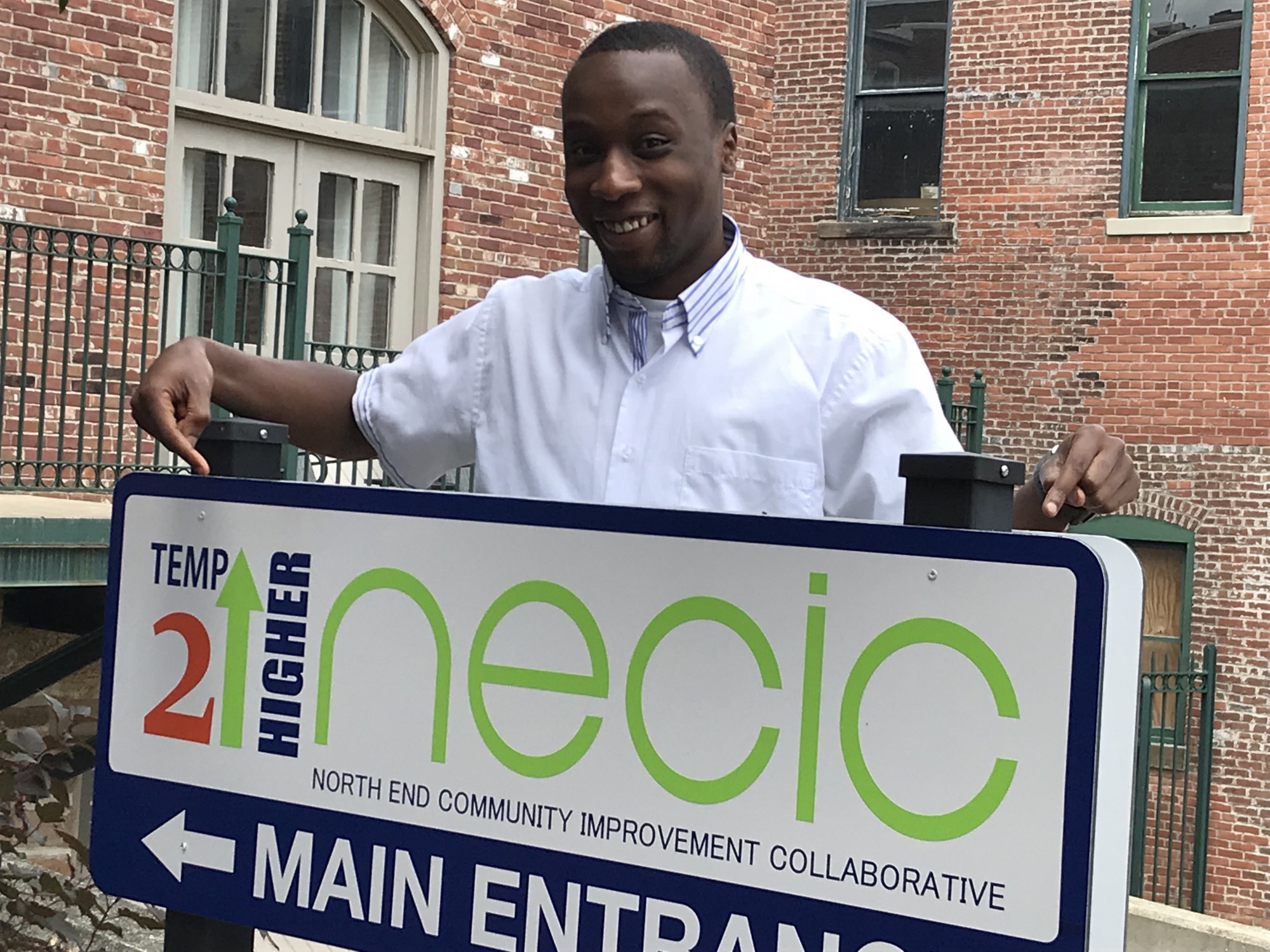 Edward Akinyemi, AmeriCorps VISTA at North End Community Improvement Collaborative, Inc. (NECIC), wants to make a difference, which is what led him down the nonprofit path and spurred him to write a book to guide others.

“I didn’t want a traditional job,” the 25-year-old explained. “I’d heard too many stories of people being unhappy, burning out from the lack of satisfaction in their work. My background is in economics, and I could have taken the banking or finance route, but it didn’t really speak to me, so I was exploring the nonprofit sector for opportunities.”

Social, community, and economic development were not popular career paths with his peers, but Akinyemi was interested in applying his skills where they would have the most impact. He was searching for a position within the nonprofit world when someone suggested he check into AmeriCorps VISTA.

“I applied to several AmeriCorps VISTA positions,” he said, “but NECIC’s offer spoke to me the most.”

Akinyemi joined NECIC in November of 2017 as an AmeriCorps VISTA. He said the experience has been a positive one. “I care about the work we do. We aren’t trying to change the world and win a Nobel Prize, but it’s nice to work with people that genuinely care about the work they are doing. I’m definitely happy with my choice.”

“From the very first time I spoke to Edward on the phone, I just knew that this would be a phenomenal match,” said NECIC Executive Director Deanna West-Torrence. “He was exactly what we needed, and we were a great fit for his educational background and skill set, as well.”

Akinyemi appreciates NECIC’s approach to community development, referring to it as rational. “We figure out where the need is, we talk to the people, we implement an approach, and we ask, ‘how did it work, how did it not work, how can we make it better’. It’s a structured approach, not just a shot in the dark, which is best shown through our [NECIC North End Community Economic Development Plan] CED plan.”

The NECIC North End Community Economic Plan (CED Plan) is a resident-driven guide to redevelopment in the North End, assembled after years of study, and updated, again with resident input, in 2017.

“I genuinely think it is a good approach: doing an in-depth study of what people say, what they think, what the community is telling us, and letting that guide everything we do. It guides our work and makes it less of a guessing game. It’s a listen and act approach,” said Akinyemi.

His experience has been so informative, in fact, that he is writing a book to guide others interested in exploring the nonprofit sector. “I’ve been blogging for a few years now on a personal basis, and have considered writing a book, but didn’t really have a good narrative. When I started here, I was like, ‘Oh, that’s it!’”

The book will focus on what Akinyemi has learned from working within the nonprofit sector, as well as his practical experience with NECIC’s CED Plan, and how those things are implemented to impact the community. “For example, I talk about North End Neighbor Up Night and how useful asset-based community development is to mobilize people to improve their city themselves and not let some big entity tell them what to do.”

He added that he’s trying to keep the narrative relatable and understandable to the average person. He’ll be self-publishing, with a plan to release the book in November, 2018.

The road to NECIC was an interesting one. Akinyemi was born in the Netherlands and lived there until his parents, originally from Nigeria, moved to North Carolina. It was there that he finished high school and completed a year of college, before moving back to the Netherlands to finish his education. He earned a BSc in Economics and Business Economics at Erasmus University Rotterdam and an MSc in Economics and Business Administration - Sports and Event Management at University of Southern Denmark, Campus Esbjerg, before returning to the United States to seek employment. Akinyemi speaks English, Spanish, Dutch, some Danish, and some Italian.

“Our VISTAs, in general, have been excellent additions to our staff, building capacity and taking on special, in-depth projects that further our mission– and Edward is no different,” said West-Torrence. “He’s incredibly intelligent, personable, pays great attention to detail, and has a voracious appetite for learning and personal development. Also, his international perspective broadens our access to potential tools, approaches, and solutions to community and economic challenges that we face here in Mansfield.”

In true community development spirit, Edward has become invested in Mansfield on a personal level. He volunteers four hours each Saturday at the local hospital, enjoys group classes at the local YMCA, and is a member of the organizing committee for Techstars Startup Weekend Mansfield.

What does a young man do after authoring a book and serving as a VISTA? “I’d like to stay here at NECIC, if possible,” he said. “I don’t think I could ever again find something that is such an excellent combination – a small city, nice colleagues, a job that is perfect for my skill set and something that I care about.”

NECIC, he said, is the reference point, the marker by which he will measure all future opportunity.